Within the Urban Development Corridor (UDC), Cushman & Wakefield Research is tracking 35 development projects totaling over $4.1 billion in current or proposed developments. Though the number of developments within the UDC is impressive, the diversity of projects is perhaps most interesting. The following map displays just how variable construction activity has been across the UDC.

As portrayed in Figure 1, urban development in St. Louis is well-distributed within the corridor in both geography and purpose. Many of these projects represent a coordinated and long-term strategy on community development. The Lawrence Group, responsible for the City Foundry development in Midtown, recently acquired three lots along Forest Park Avenue. Smith, CEO of Lawrence Group, told the St. Louis Business Journal that he also had several parcels near the site owned by the Missouri Department of Transportation under contract. With additional office development being proposed as a part of the Foundry’s master plan, it’s clear that active players in the market see Midtown as a future office-hub. To understand how much this area stands to evolve over the next few years, check out Cushman & Wakefield’s new EdgeView and visualize how these developments intend to reshape Midtown. 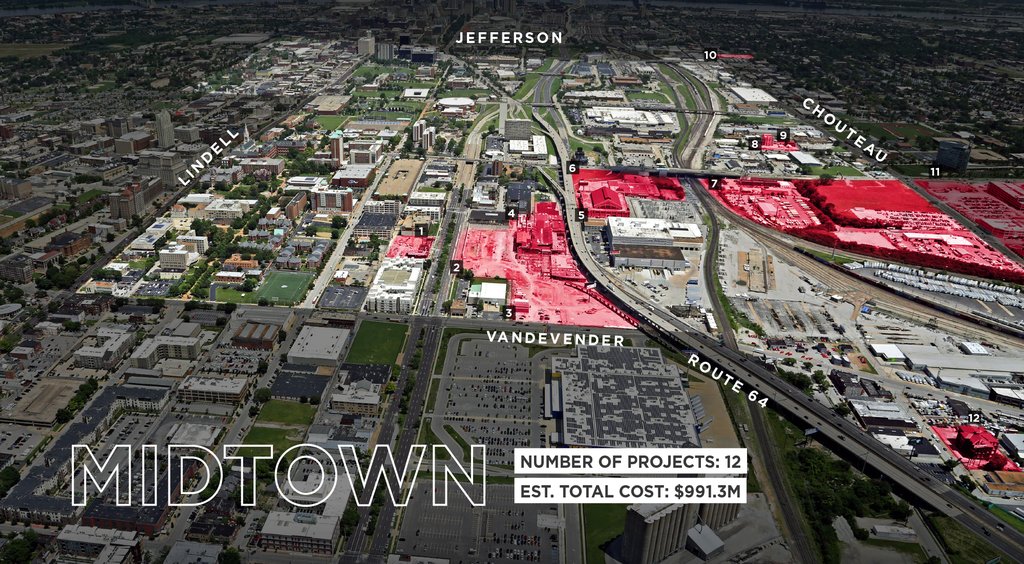 City Foundry, an ambitious mixed-use project including an office component that is 93% preleased, a food hall that is 80% preleased and which also recently landed a 30,000 sf commitment from the national grocer Fields Foods, will provide a sorely needed dose of retail to an area currently devoid of such elements. This potential for improvement is not lost on Pier Property Group’s CEO, Michael Hamburg,

“We lack so many amenities that cities our size possess. It is nice to finally see us pushing the ball forward in a big way. As this region had been undersupplied with new product for such a long time, I am very bullish on the continued need for better housing and commercial/retail space in this part of the city.”

Roughly one mile from City Foundry, Hamburg’s firm is developing a series of high-end apartments inside and around the former Steelcote Paint building in Midtown. Totaling roughly $32m in adaptive reuse and new construction, PPG’s project should attract the interest of high-earning hospital and office occupiers in nearby City Foundry, Armory and SSM’s new $500 million hospital development. Further strengthening the local amenity-base, PPG’s project includes traditional retail space and a microbrewery that will be accretive to the new Midtown experience. With signature residential, office and retail development on the horizon, Midtown is quickly becoming a commercial hub that will cater to increased demands for live-work-play continuity throughout the urban core.

As Midtown enters a new age of commercial continuity, young professionals and residents will no doubt follow. According to a 2016 poll conducted by the Urban Land Institute, the millennial demographic favored urban amenities at levels that far outpaced that of their generational counterparts. In fact, when it comes to transit access, walkability, and retail elements, Millennials indicated heightened levels of preference:

With the convergence of these signature developments and the generational preference for experiential urban continuity, Midtown offers a glimpse into what will inevitably become a major hub of commercial activity across the Urban Development Corridor. Tune in next week as we discuss Major Drivers including more commentary on Millennial demographic strength and an analysis on apartment growth throughout the UDC.